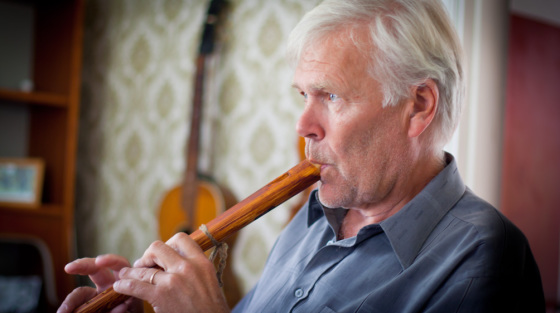 Mats Berglund from Köla, Värmland, plays the violin, the accordion and folk flutes. His first teacher was the fiddler Ola Jonasson from Hotagen, Jämtland. Another great role model is John Hollseter, fiddler from Trysil, Norway.

For many years, Mats has taught folk music at the Ingesund School of Music in Arvika. Some specific characteristics of his playing are ‘halling’ dance tunes and the asymmetrical triple time of the Swedish-Norwegian border region.

In 1989, Mats was engaged in the project ‘Music of Past and Present in the Härjedalen Forests’, where he met musician and violin maker Oskar Olofsson from Lillhärdal. One of the aims of the project was to reconstruct the flute model that had been used by Olof and Jonas Jonsson in Överberg during the first half of the 20th century. The project also resulted in the 1990 album ‘Härjedalspipan’, recorded by Mats and, among others, Ale Möller. The album was the first to spotlight the Härjedalspipa and has contributed greatly to today’s growing interest in folk flute playing and folk music far beyond the borders of Sweden.