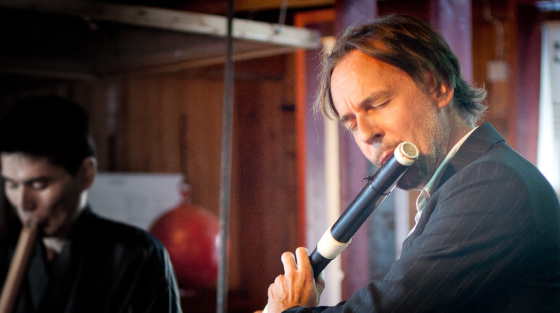 Göran Månsson belongs to a well-known family of musicians. He has been working actively for the dissemination and development of the Swedish folk music heritage for many years. The family farm Mon, in Haverö in the central region of Sweden, is the hub of the Folk Flute Academy’s activities. Göran’s distinctive music includes everything from delicate pastoral tones to fiery funk. When King Carl XVI Gustaf and Queen Silvia visited the area in 2014, the Queen likened him to a magician. Göran has participated in a wide range of recordings since his solo début Inland (Drone 2002). In 2007, Göran, together with guitarist Roger Tallroth, recorded the CD Mon, nominated for the Manifest Prize.

Göran regularly performs with the groups Gjallarhorn, Frispel, Månsson/Åberg, Sarek and Göran Månsson Band, the latter considered in Japan to be one of the most interesting Nordic live bands ever to have performed there. He teaches folk music at the Royal College of Music in Stockholm, at the Sibelius Academy in Helsinki and at the Oslo Music Conservatory.